SOMETHING DEAD FROM THE SHED - Giganotosaurus carolinii

When is a saurus not a saurus? Why when its a Giganotosaurus of course! Ho ho! This is your old pal Jack and we're going to tell you all about this great cheeky bugger Giganotosaurus carolinii. He's a sight to make you take the cure, is he not? 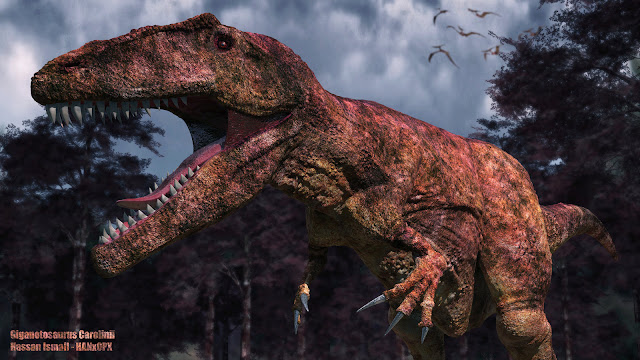 You know I always fancied a keen blade, did my best work with surgical steel if I do say so myself. This fellow here had jaws just filled with daggers fore to aft; I expect he'd have cleared the East End in a week. Pity he wasn't around in my day.

Well I'm not here to reminisce, I'm hear to present to you the star of the evening, Giganotosaurus carolinii front and center, big as life and twice as handsome here on Something dead from the Shed!

Long before Tyrannosaurus rex terrorized the North American woodlands at the close of the Cretaceous period another giant theropod dinosaur dominated the forests and swamps of what would become southern Argentina. Giganotosaurus carolinii, a name which means “Great Southern Lizard” is the current holder of the title: “Largest meat eating dinosaur”. Unless or until an even more awesome discovery turns up this also makes Giganotosaurus the largest land based predator of all time.
In fairness to Spinosaurus, who would otherwise hold the title outright, there is considerable debate over whether Spinosaurus was more aquatic than land dwelling. Until this issue is resolved it seems reasonable to lean towards Giganotosaurus.

The find of a lifetime:

Giganotosaurus was discovered by Ruben Carolini, full time auto mechanic, part time fossil hunter at a site known as the Candeleros formation in Patagonia. Mr. Carolini soon recognized the magnitude of his find and excavation was continued by the Carmen Funes Museum in Neuquen, Argentina. Rodolfo Coria and Leonardo Salgado published the initial findings in Nature in 1995. The species is named carolinii after the original discover, Ruben Carolini
.
This partial skeleton and subsequent finds reveal a bipedal meat eater cut from the same basic pattern of the more familiar Allosaurs and Tyrannosaurs, but on a monumental scale. A large Giganotosaurus is believed to reach up to 52 feet from nose to tail tip, stand 12 feet tall at the hip. Estimates of weight vary widely but max out at over 13 tons. An enormous head over 6 feet in length topped the powerful neck of a large adult; the jaws filled with razor sharp 8 inch teeth designed to shear meat rather than to crush bone. The skull of Giganotosaurus is the largest of any meat eating dinosaur yet discovered. 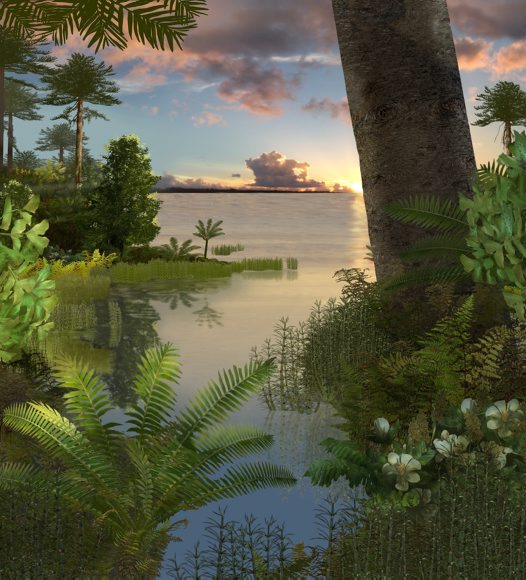 Patagonia and indeed much of the planet during the mid Cretaceous possessed a warm, humid environment compared to that of today. Temperatures averaged some 4 degrees Celsius higher than at present, the oxygen content and CO2 levels were both significantly higher than is today’s norm. The world of Giganotosaurus would have encompassed swamplands, wetlands and some forests. Here, Giganotosaurus would have shared space with some of the largest sauropods dinosaurs of all time; giants like Argentinosaurus, Andesaurus and Futalognkosaurus dukei.

Giganotosaurus was a meat eater as are almost all the known theropod dinosaurs and would have preyed on any and all of the above named sauropods. There is some evidence that fearsome as a single Giganotosaurus was, it may have hunted in packs at least part of the time. This would have made the formidable task of downing a huge creature like Argentinosaurus, which may have been nearly 140 feet long and weighed in at as much as 100 tons somewhat less dangerous.

Competition would have come from contemporary theropod dinosaurs like Carnotaurus, a smaller but still formidable bull horned meat eater weighing about 6000 lbs and going about 25 feet nose to tail.

The impressive size of this dinosaur’s skull has been previously described but even with all that room available it contained a brain approximately the size and shape of a banana, or half the volume of that possessed by the later and slightly smaller Tyrannosaur.

Tyrannosaurus rex vs. Giganotosaurus carolinii; the tale of the tape:

Tyrannosaurus rex has for a long time been the most recognizable of the theropod dinosaurs, but Giganotosaurus is rapidly catching up. These apex predators separated as they are by time and space could never have come face to face but just for fun let us see how they compare to one another.

Weight: T. rex as much as 8 tons, Giganotosaurus possibly as much as 13 tons.

Teeth: T. rex large, conical bone crushing teeth with an overlapping bite, lengths to 9 inches are typical but individual teeth to 13 inches have been found. Giganotosaurus possessed teeth around 8 inches long, sharp and adapted for sheering rather than crushing. Both animals could replace damaged teeth.

Intelligence: The banana sized brain of Giganotosaurus has already been referenced; Tyrannosaurus had a brain over twice that size with well developed vision and olfactory centers. T. rex was probably the more intelligent of the two as far as this quality can be measured among dinosaurs.

The once and future king

So there we have it, Giganotosaurus carolinii, one of a spate of fascinating discoveries from the fossil fields of Patagonia and apparent deposer of Tyrannosaurus rex as world’s heavyweight meat eating dinosaur. The world awaits further discoveries to expand our knowledge of this undoubtedly fascinating creature.

A brain the size of a banana! I expect most Senators would be envious wouldn't you think? That about wraps it up for Giganotosaurus; as always this is your old pal Jack, saying thanks for visiting "Something Dead from the Shed"!

Wow, Can you imagine meeting up with one of those? Makes a bear seem like a fly...albeit a very big fly which could just as easily tear me to shreds. Oy! Thanks for the lesson!

These guys would swallow you in one gulp!

Looks menacing and scary too...