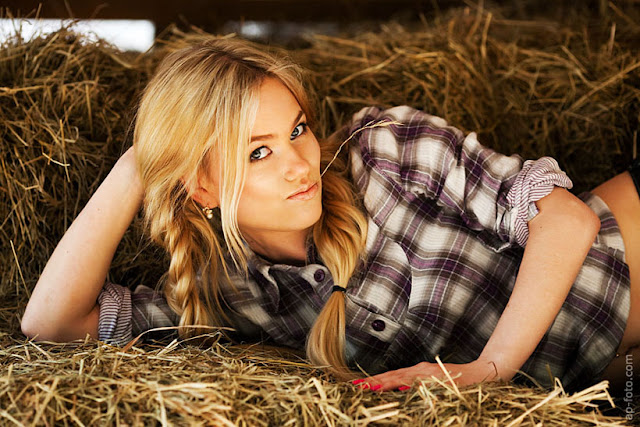 The Quick Start Cabbages and Jersey Wakefields are doing very well indeed and are about due to be muched, we have an inordinate amount of turnips.

Collards, chard, peas and carrots all doing splendidly and as for the first bunch of radishes? We ate 'em already!

Newly planted bell and cubanel peppers took hold despit a few chilly days as have the cucumbers that we transplanted and the zuchinnis have sprouted. Things are well thus far.

But now its time to sow the parsnips. Bleah!

Farm Girl again! Back from doing Viking research in Minnesota and rarin' to do some
hoeing!

Our cabbages have been transplanted to their new outdoor bed and we'll wait a few days to see what happens, - the first few days are the major danger zone - and then we'll get you some pictures.

Also, of all the extremely early plantings we did, carrots, collards, turnips, radishes, peas, and two tomato plants (yeah I know) everything is up and doing well except the tomatoes, which are deader than John Wayne Bobbits taproot.

The peas (Burpees Easy-Peasy, I swear, I don't name 'em I just weed 'em) I think we had 100% germination! How about them app er, peas?

Hey! Farm Girl checking in with stunning developments on the cabbage front! It seems the Quick Start Cabbage seeds we planted in pots just 4 days ago are already living up to their name. Due to the abysmal photography skills of Leatherface, it may be hard to see but that miniscule white blot under the arrow is, in fact, a cabbage! Break out the spuds and the scorned beef! 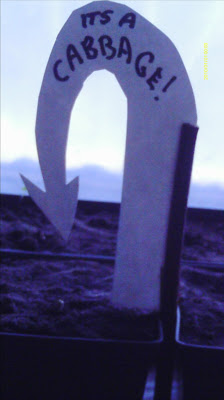 IT REALLY IS A CABBAGE!

Hi! I'm Farm Girl and I can generally be found around the shed or in the garden, helping out with this and that as need be. Why just today Uncle Mac poked his head out of the shed and hollered:

"Farm Girl! Git your butt in here and help me rearrange the hay!"

I just rolled my eyes and said: "Oh sure Mac, like I'm gonna fall for that four times in one week! I graduated Texas A & M you know!"

Besides that darn hay just works its way into everything. 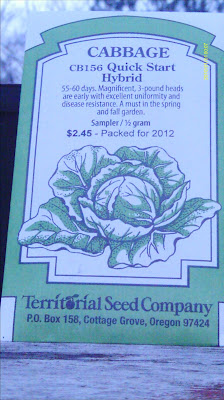 Today I'm here to talk about a new veggie in this years garden. Usually we direct seed cabbages with a long growth period, like Jersey Wakefield, Goliath or Stonehead. We wait until just about two weeks before the nominal last frost date - April 20th - and seed into well prepared soil. This generally works out well and we get large cabbage heads in 90 to 105 days depending on variety. Excessive hot dry spells have been problematic in the past and besides that, July - August is later than most folks want to see their first cabbage.

This year Uncle Mac decided that a little head in a hurry might work out better than the promise of a lot in mid summer. I marvel that he took so long to figure that out.

We chose Quick Start Cabbage, from the Territorrial Seed Company who have been a reliable seed source for us for many years. Quick Start is billed as being ready for the pot in 55 to 60 days, and coming in at an average weight of three pounds is usually enough for most families.

To get a real jump on the season, we started the cabbages today, March 8th, 2012. General cabbage lore tells us to start the indoor seeds 6 to 8 weeks before the final frost date and if we adhere to April 20 as the average date, we are splitting the difference at 7 weeks.

There is a huge caveat concerning the frost date this year. Winter so far has been the mildest on record in this neck of the woods. There has been just one snow storm, and that on Halloween. There has been next to no frost. Today, for example, the temperature reached 68 f.


Obviously it is not possible to predict what will happen over the next two months so we'll adhere to traditional timing.

﻿We like to use a larger pot than is standard, the cabbages will be in them for several weeks after all. These pots measure 4" x 4" x 4", and we have used them many times, for many plants.

[Note; when re-using pots, alway clean them well before storing for the next season, we use warm water and a little chlorine bleach, followed by a hotwater rinse. Plant diseases can be spread by contaminated pots as well as tools.] 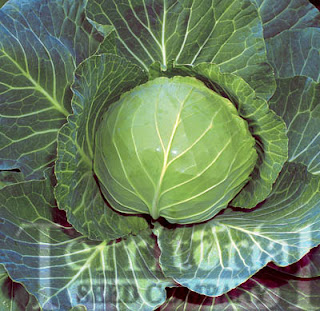 We use a two stage growing medium. The pots are filled halfway with sifted compost from our heap, and then filled to the rim with an unfertilized potting soil. This is not mandatory, but seeds given this kind of a start do seem to prosper!

We plant 3 seeds per pot, 1/4" deep and then gently pat down the soil. When these germinate as we expect them to in 10 to 14 days we will remove all but the healthiest specimen.

Then it is just a question of keeping an eye on the fledgling cabbages, watering and turning them as needed and perhaps exposing them to a gentle breeze from an electric fan by way of an indoor hardening off process.

Then, if all goes well and the weather and critters cooperate, and if the good folks from Territorial Seeds are correct in their projections, we should be enjoying fresh cabbages just like the one pictured by mid June. We will be updating everyone on their progress along with several other plants that are new to us so stay tuned!

That's about it for today and as always thank you for visiting Farm Girls Corner!

The cabbage looks good to me, Mac! our cabbage suffers with the summer heat and takes off when the weather gets cooler. Not much point in planting ours so early. Keep us posted as to how it works, maybe rearrange some hay in the meantime! ":))

A fan to "harden" them off indoors is a great idea! Can't wait for photos of your growing cabbages. My rabbit population has never allowed me to grow cabbage...oddly enough they left the bok choy alone...so I planted loads of that.

It doesn't completely harden them, takes the great outdoors for that, but it does prevent tall, weak stems and thats a help. Standard hardening is still needed but for less time. Don't worry I'll bore ya with pics!

What a cabbage, Mac! That sure is one fast cabbage-starter you have there. Looks good to me!
I don't know if stale coffee grounds will keep rabbits away from cabbage, but it sure does keep slugs off of them! Also, diatomaceous earth is helpful, makes the outside leaves gritty. ":)

WOW! That is amazing. Farm girl must like you for your fast swimmers.;-)