SOMETHING DEAD FROM THE SHED - Smilodon, the cat who came to dinner.

Hello everyone its your old pal Jacky straight from Whitechapel to Uncle Mac's shed by the miracle of the wormhole. I don't pretend to understand wormholes, mind, although I can navigate one well enough in a pinch. I do know that because they exist my neck has gone unstretched for over a century now and that's enough to be getting on with.

I was up in the hayloft - yes the shed has one, sometimes several, although you'd never know from the outside - trying to think of a new topic for "Something Dead from the Shed" when one dropped into my lap, figuratively and literally.


As I was saying there I was lyin' about waiting for inspiration when Farm Girl comes in through the orchard door and starts making a pot of coffee. At about that moment I hear a "pop" outside the garden door announcing an arrival via wormhole, and Uncle Mac comes banging in, arms loaded. From my vantage point I could tell he wasn't quite ready for Farm Girl.

The coffee pot banged on the top of the potbellied stove.

"Well what..." said farm girl, approaching, "another bobcat? And what is Mrs. BobKat going to think about that? You know how territorial they are! Wait just a second here..."

She took the "kitten", about the size of a middlin' house cat, held it at arms length looking it over closely. Then she pulled it in and held it like a treasured pet. The kitten seemed to be sleeping.

"No." said Farm Girl. "No, Mac. No! We cannot keep a saber toothed kitten, I don't care how cute he is. Sooner or later he'll be a saber toothed cat. Nobody is going to believe its an ocelot with an eating disorder and big teeth. He has to go back! Now, before everyone else sees him and the arguments start."

"Too late!" I said, not wanting to appear to be spying, and I dropped down the ladder from the loft. "Let's take a look at the little bugger."

And indeed, a cute little bugger was he. The out sized fangs had barely started to develop and the soft fur was patterned much like that of a clouded leopard. This should really have been no surprise because although we call the critters "saber toothed tigers" they are not particularly close relatives of tigers at all, and no one today has a clue as to how their coats may have been colored and patterned.

"I'll get him something to eat", said Farm Girl and thrust the wee creature at me. "I hope you were not counting on cream in your coffee, Mac."

At this moment there was a thump from the side of the shed and Mrs BobKat dropped in through the second floor hay door, fresh from her sentry post atop the garden fence from which she kept watch for interloping bunnies, chucks and other furry marauders.


Sniffing suspiciously Mrs. B soon detected the odor of strange cub and cat-footed up to where I held him. She sniffed the cub from nose to tail tip, and then head butted him gently. The kitten half woke, demonstrating the blue eyes of a baby feline, and with a protesting mew biffed Mrs. B on her nose with a paw.

Mrs. BobKat took this as a signal to begin a thorough washing of the newcomer with her excessively raspy tongue. There ensued a number of loud kittenish complaints, which were completely ignored.

Farm Girl, now in latex gloves and holding a bowl of warm cream, plucked the cub from my lap and Mrs. B's tender ministrations. She presented the saucer. There was much rejoicing.


"So!" began farm Girl conversationally, but with just a hint of an edge to her voice. "What year did you pluck this hungry little guy from?"

"So he isn't Gracillis and we can't do a little dentistry and pass him off as a leopard, as if that would be easy to explain."

"No, not Gracillis" said Mac, staring with great suspicion at something in the far corner by the gardening tools.

"Did he perhaps come from California, you whiskery old waste of denim?" The edge in her voice was no longer a hint.

"No, no." replied the Waste of Denim, suddenly finding something extremely interesting in the uppermost rafters. "Not Smilodon fatalis either."

"Populator. Smilodon flippin' populator, big as a bear and 5 times more dangerous. Oh good choice Mac he'll fit right in with the rest of the psycho killers! What do you use to think with? Never mind, I know the answer to that already!"

"Well it is not going to happen. When he's done eating you take him back."

Our errant Uncle looked straight at Farm Girl for the first time since he had dropped through the wormhole.

"He's an orphan. His mother tried for a giant ground sloth and missed her hold. The sloth tore her to bits. He has no where to go."


As you might expect, the debate raged on for some time and the outcome has not, as yet, been determined. If you want my best guess I'd say we probably have a new cat.

One thing we don't have to guess at is the topic for this episode of "Something Dead from the Shed"! And thus with no further ado...

When is a tiger not a tiger?

A tiger is not a tiger when it is a saber toothed cat. The saber toothed cats represent a now extinct line, the Machairodontinae that diverged from the line that leads to the Panthera genus or modern big cats about 23 million years ago during the Miocene epoch. There are no descendants of the Machairodontinae line living today. The last of the breed, Smilodon fatalis and Smilodon populator are thought to have become extinct about 10000 years ago.

The big saber toothed cats are all thought to have descended from Megantereon, a true cat that enjoyed a wide distribution throughout Africa, Asia, North America and Europe over a period of about eight and one half million years during the late Miocene and into the Pleistocene. Megantereon had all the credentials. Its stocky jaguar sized body maxed out at about 350 pounds and this apex predator sported enlarged canines like his famous descendants. Megantereon's immensely strong forelegs were as large of those of a modern African lion.

Megantereon died out about 500,000 years ago, its remains have been found at some of the same sites as our ancestors Homo ergaster and Homo erectus, giving rise to speculation that the latter must at least occasionally have become prey.


Replacing and possibly evolving directly from Megantereon, Smilodon gracilis appeared about two and one half million years ago and became extinct about 500,000 years ago. Gracilis was actually a smaller animal than Megantereon, at most little more than 220 pounds, yet it was a true saber toothed cat and in all likelihood spawned the behemoth species which followed.

Gracilus gradually gave way to two larger species, Smilodon fatalis and Smilodon populator. Fatalis roamed North America and parts of South America. This species was approximately the size of a modern Siberian tiger, but the build was more powerful, almost bear like, and the fore body strength is unmatched by any of the predators of today. Smilodon fatalis may have reached a weight of 650 pounds, and may have stood almost 40 inches high at the shoulder. 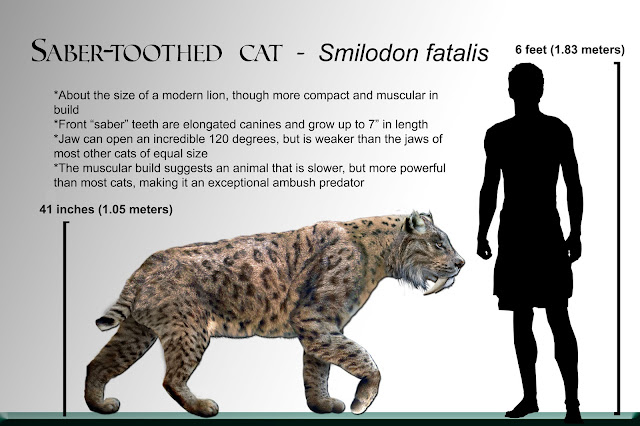 Smilodon fatalis is thought to have fed on most of the larger game animals extant at the time and as it became extinct no earlier than 10,000 years ago it would have crossed paths with modern human beings. It is hard to visualize a positive outcome for the humans when such encounters occurred.

If Smilodon fatalis was awe inspiring, how much more so Smilodon populator, a true giant who roamed South America from approximately a million years ago to just under 10,000 years past. These titanic cats could weigh 900 pounds, measure over seven feet in length and stand four feet tall at the shoulder. Their famous fangs could top eleven inches in length.


Populator had immense front body strength compared to that of modern day big cats and even to its cousin, the remarkably powerful Smilodon fatalis. As the enormous canine teeth were not truly adapted for biting it is thought that Smilodon used its strength to pull down and hold its prey, and then utilized its tremendously powerful neck muscles to power the fangs through the windpipe, blood vessels and nerves resulting in a relatively quick kill.

Smilodon would have needed all of this power to subdue animals like the horse, camel, bison, deer, young mammoths and mastodons and even the ground sloth and occasional human on which it apparently fed. The trade off for this robust body build was a decrease in speed, and Smilodon would probably have had difficulty in subduing smaller, fleet footed game.

It has been suggested, although it is not certain, that Smilodon behaved more like the social African lion and lived and hunted in prides or packs, rather than like the solitary tiger or leopard.

This lack of speed may have contributed to the downfall of Smilodon, which occurred only yesterday on the historic time line. Ten thousand years ago many of the larger game species also became extinct either due to the activities of upstart Homo sapiens or to clamate change consistent with the end of the ice age. In any event, Smilodon of all species were left without their best source of prey, the result was evidently catastrophic.

Many intact skeletons of both fatalis and populator are known, the former from the La Brea Tar Pits among other sites, and the latter from a number of cave sites in South America. Excellent reproductions may be found on line and in museums, and in various film specials on the History Channel, A and E and Discovery.

Wow, I'm with farm girl. Send it back and quick!